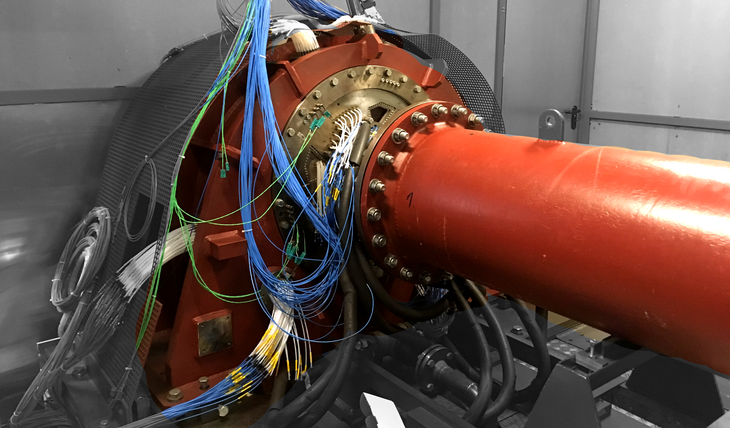 Since 2001, this test rig has been operated in cooperation with engine manufacturer GE Aviation (GEA) for the experimental investigation of radial compressor stages. The single-stage compressor stage installed in it corresponds to the design philosophy of modern radial final stages of jet engines in the lower thrust class and is used in various applications.

The modular design of the test rig enables the rapid installation and removal of individual components, which are measured in terms of their global performance characteristics and in detail. In particular, the diffusion system has been the focus of detailed experimental flow investigations in the past, which are also used to validate numerical simulations.
The centrifugal compressor stage operates in a closed circuit, allowing the inlet boundary conditions to be set independently of the ambient conditions. A metering orifice in the inlet is used to determine the inlet mass flow. In the inlet plenum, the flow is homogenized by rectifiers and then guided axially to the compressor stage via an inlet pipe. The air leaving the stage is also collected in a plenum. A throttle valve located behind it is used to set the desired operating point.

The compressor is driven by a three-phase motor with a maximum power of 1,600 kW. The gearbox used between the motor and the compressor enables compressor speeds of approx. 20,000 rpm. The compressor shaft is suspended by means of active magnetic bearings and is therefore wear-free. Control of the magnetic bearing enables the rotor shaft to be moved axially during operation (e.g. as part of gap tests) or to carry out surge limit measurements.

The energy supplied during compression is dissipated in an air-water heat exchanger so that the temperature at the compressor inlet is kept constant. The regulation of the pressure is realized by means of an automatic pressure control.

The centrifugal compressor stage consists of a shroudless impeller, a diffuser, and a downstream guide vane. In order to study the stage under similar operating conditions to the engine application, there is a guide vane upstream of the impeller which, in conjunction with the casing and a cone-shaped hub body, simulates the downstream flow of the axial compressor. The shroudless impeller uses main and splitter blading. The axial alignment between the impeller and the diffuser can be flexibly adjusted thanks to the magnetic bearing.

Either a tubular or a profiled blade diffuser (LSD = Low Solidity Diffuser) is used as the diffuser. The latter represents an option for considerably increasing the width of the centrifugal compressor map. In addition, a large variety of different downstream diffusers are available, either as single or tandem grids. These are installed downstream of the diffuser and realize the deflection from the radial to the axial direction. At the same time, you need to realize homogenization of the flow for the combustion chamber following in the engine.

The transient impeller-diffuser interaction is high in all configurations because the distance between the impeller trailing edge and the diffuser leading edge is chosen to be small. In addition, secondary motions are formed in the diffuser inlet as a result of its three-dimensional design, which shape the flow pattern throughout the diffuser.

The investigations on the different diffusers and diffuser guide vanes are aimed at improving the stage efficiency and extending the characteristic map width. In addition, however, the aim is also to reduce the radial installation space.