You Are Here: Energy Conversion Systems for Zero-Emission Aviation

There is no alternative to climate protection and it affects industry and society equally. The aviation industry must also
contribute and gear its future development programmes towards sustainable mobility.

In order to achieve the emission reduction targets, the energy conversion within the engine must be made more efficient. One possible building block is the (partial) electrification of aircraft propulsion systems. In addition, new fuels such as hydrogen and e-fuels offer the potential for CO2-neutral aviation. The respective properties of these fuels bring new challenges, so that energy storage is also being considered at the IST in addition to energy conversion.

The electrification of aviation propulsion systems offers great opportunities, but at the same time increases system complexity. For example, a parallel hybrid has two different energy converters and storage systems. The optimal design of this system therefore requires new tools, such as those being developed at the IST.

The new energy conversion systems and storage systems place different demands on the aircraft and cannot easily substitute conventional drives. For example, electric motors and lithium-ion batteries operate within much lower and narrower temperature windows, so thermal management has to be completely rethought.

Where fossil fuel is often stored in the wings, this solution is not immediately feasible for the storage of cryogenic hydrogen. The integration of the novel propulsion systems with their described challenges is also the subject of research activities at the IST.

A new industry takes off 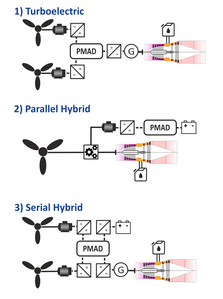 Electrification can reduce emissions in aviation through efficiency-enhancing measures, but it cannot completely decarbonise all classes of aircraft due to the low energy and power density of battery systems. Therefore, in addition to electrification, the focus is also on new types of energy sources.

Advances in battery storage technology and electrical energy converters are increasingly bringing electromobility to the aviation industry. The possibilities extend across a wide range of power and aircraft classes.

Despite the higher efficiency of the electric drive components, the use of Li-ion batteries as energy storage is limited by the significantly lower gravimetric energy density compared to e.g. paraffin.

A battery electric propulsion system for a small aircraft with a mission over 500 km therefore weighs more than four times as much as systems with combustion engines. This reduces the application for battery-electric aviation propulsion systems to short-range and experimental aircraft, which can thus be operated without emissions.

Hybrid drive systems are now widespread in the automotive industry. The scaling of the electrical system, both in terms of energy and power, is very broad. In aviation, hybridisation can also contribute to an improvement in system efficiency and thus to a reduction in emissions. For example, an electric motor in a parallel hybrid propulsion system can release additional power during take-off and climb, so that the engine used for cruise flight can be designed smaller and thus more economical.

In addition, electrification opens up new options for power transfer between the shafts of a multi-shaft engine, thus increasing the efficiency of the propulsion system and contributing to a reduction in emissions.

Synthetic fuels are currently being researched to reduce emissions from existing aircraft engines. During their production, these bind CO2 from the atmosphere, which is released again during combustion in the engine or piston engine. This CO2 neutrality already leads to a reduction in emissions when blended with fossil fuels. At present, the production of sustainable fuels requires a lot of energy. Compared to fossil fuels, this results in a higher price per litre.

Hydrogen as an energy storage medium

Due to its high gravimetric energy density, hydrogen has great potential to make aviation emission-free in the long term. In order to keep the tank volume low, the hydrogen must be carried in a kyrogenic, i.e. liquid form. This poses new challenges for the industry in the area of tank insulation, since the hydrogen must be transported at about -253°C.

In addition to being used as a fuel in piston engines and jet engines, the hydrogen can be converted into electrical energy in a fuel cell. In the long term, this combination enables purely electric propulsion even for longer flight distances.