You Are Here: Flow Measurement Technology 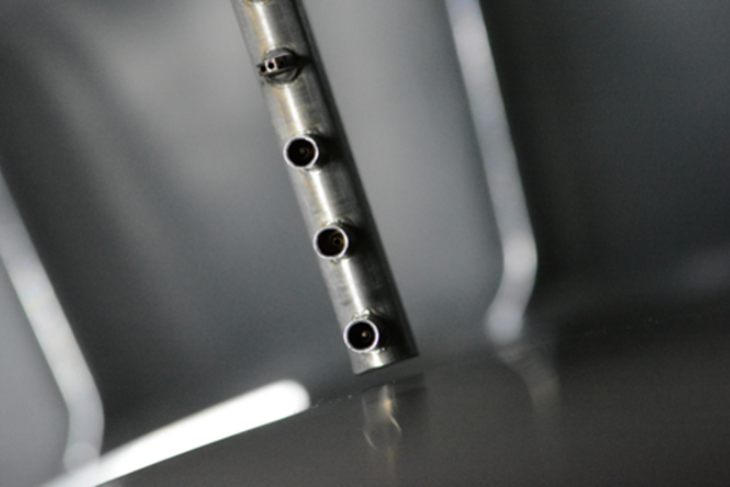 In spite of the ongoing development in numerical computation methods, experimental investigations will remain an essential part of valid research on turbomachinery for the foreseeable future.

At the test rigs of the institute different measuring techniques are used, which are individually adapted to the respective measuring application. In addition to classical pressure and temperature measurements, which are used in almost all test rig to determine global performance data, a large number of special solutions are as well. These include, for example, profile pressure measurements or leading edge instrumentation. Unsteady pressure measurements are also carried out on rotating test rigs.

The IST has a great experience in the design and construction of a wide range of measurement techniques. In addition, static calibrations for pressure and temperature as well as dynamic calibrations in the free jet calibration wind tunnel can be carried out at the institute. 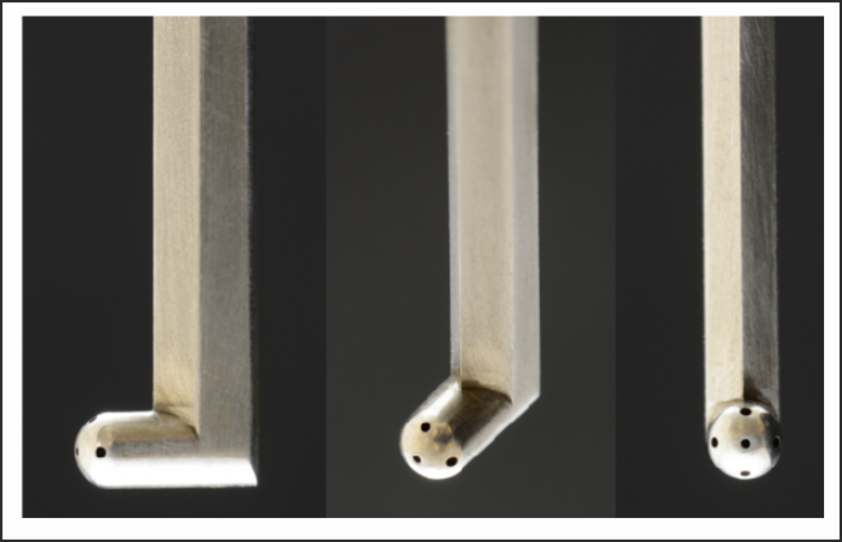 The institute has a modular system for various pneumatic probes. This is used to provide the appropriate measurement technology for the application.

The institute also offers probe manufacturing and calibration as a service. In addition, individual probes and probe traversing units can also be developed and built. A calibration at the free jet calibration wind tunnel is also part of the institute's scope of services. Please find more information in our Probe Catalogue.

5-hole probes are used for the experimental determination of flow angles and are suitable for the investigation of three-dimensional subsonic flows.

The recommended Mach number range is between Ma=0.1 and 0.9. In addition to static and total pressure, Mach number and flow angle are also measured.

3-hole probes are used for the experimental determination of two-dimensional flow fields and are suitable for the investigation of near-wall flows. As with the 5-hole probe, the recommended Mach number range is between Ma=0.1 and 0.9.

Kiel head probes are characterized by a high angular independence and are therefore particularly suitable for the determination of total variables in flows with unknown or strongly varying flow angles. As with the 5-hole probe, the recommended Mach number range is between Ma=0.1 and 0.9.

The probe can optionally be equipped with a thermocouple so that, in addition to the above-mentioned quantities, the total and static temperature can also be measured. 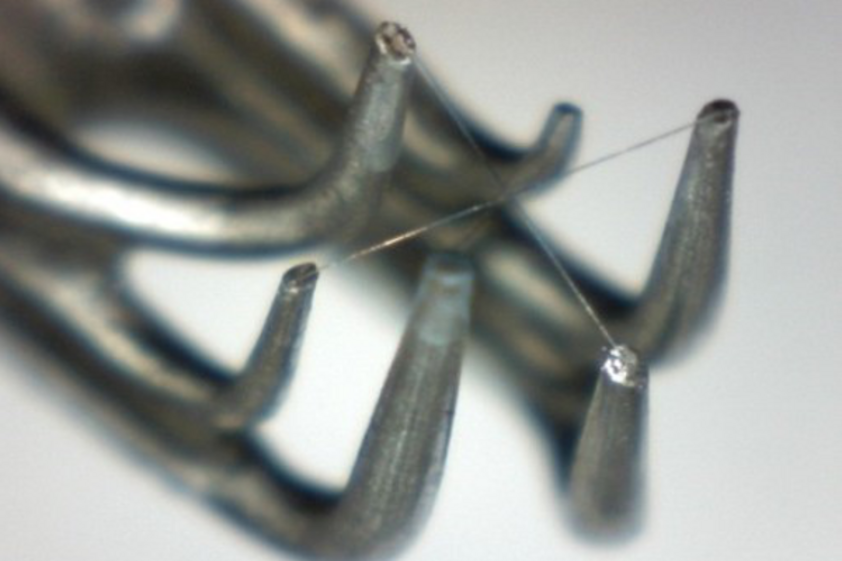 The operating principle of this measuring technique is the transfer of heat from a hot surface into a flow. The heat transfer depends on the surface temperature and the flow variables temperature, density and velocity.

At IST the CTA (constant temperature anemometry) method is used, in which a wire (usually made of tungsten) is kept at a constant temperature. If the temperature difference to the flow medium is known, there is a clear correlation between heating power and the heat transfer coefficient.

The heat transfer coefficient is proportional to the so-called mass flow density (product of density and flow velocity) perpendicular to the measuring wire.

The relationship is non-linear and directional. The measuring arrangement supplies a voltage as an output signal which is dependent on the change in heat dissipation. The calibration of the probe should be carried out at the flow temperature which also prevails in the measured flow. If this is not possible, there are correction procedures which, however, have a negative effect on the measuring uncertainty.

From the voltages of a 3-wire probe, the angle of incidence of the probe as well as the mass flow density can be determined with the use of calibration polynomials. To determine the flow velocity, the (mean) temperature and pressure of the flow must also be known.

Limits of the field of application

Hot-wire probes work with sensor strengths in the micrometer scale and are therefore not suitable for use in harsh environments. Due to the mutual influence of the wires and the angles under which they are arranged, the measuring range is reduced compared to 5-hole probes. However, the sensors can detect unsteady flow processes very well. 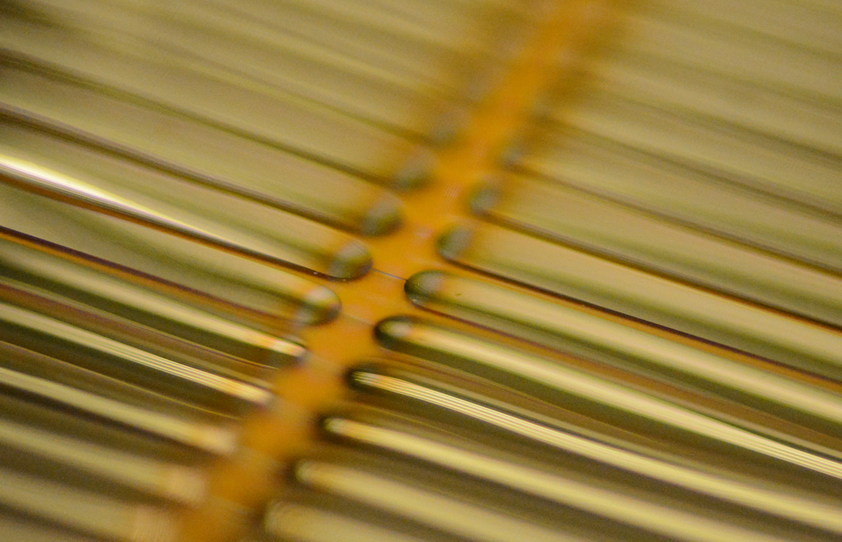 Hot-film anemometry is based on the same operating principle as hot-wire anemometry. An electrical resistance in the form of a thin metal film ("surface hot-film sensor") is cooled by a passing current. In the constant-temperature anemometer, for example, the electrical power to be applied to maintain a fixed selected temperature of the hot-film donor serves as the measured variable.

Hot films are applied to compressor and turbine blades to determine the transition position. The individual sensors consist of a 10 μm thick gold or nickel layer 0.1 mm wide and 0.9 mm long. They are vapor-deposited at a distance of 2 - 3 mm on a 50 μm thick carrier foil. In the example shown above, the connection of the sensors to the measuring system was solved with flexible and custom-made conductor tracks that connect the sensors to the measuring bridge.

By determining the temperature-dependent resistance of the hot-film sensor in advance, the course of the wall shear stress can be qualitatively determined from the measurement data (the so-called quasi wall shear stress). 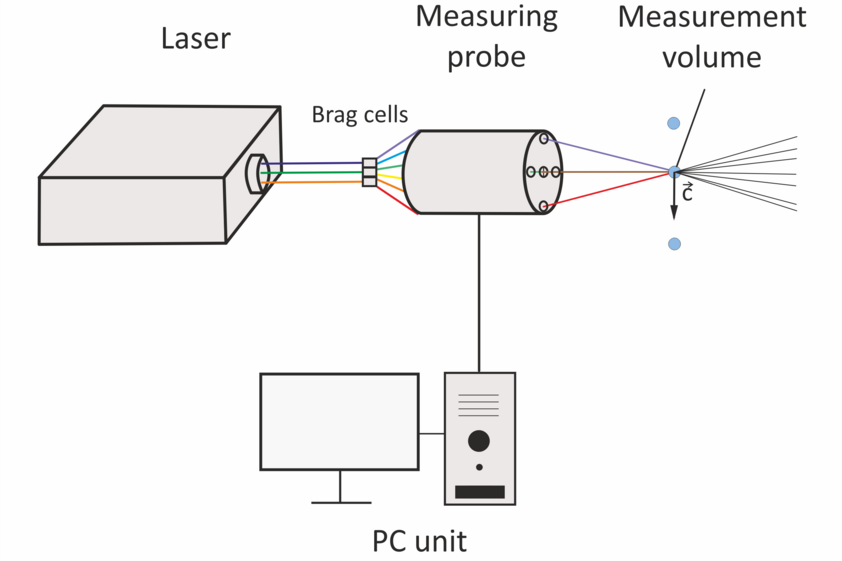 Laser Doppler Anemometry (LDA) is a non-contact measurement method for the point-by-point measurement of steady-state and transient flow velocities in up to three spatial directions.

In the two-beam method, two laser beams of the same wavelength are focused for each velocity direction and superimposed at their focal point. The overlap region thus formed defines the measurement range and is characterized by an interference fringe pattern formed parallel to the beam cross axis.

If particles (e.g. oil droplets) are added to the flow and their scattered light is detected as it passes the interference fringe pattern, the registered scattered light signal is called a Doppler burst. This Doppler burst is decomposed into a DC and AC component for signal processing, and the Doppler frequency is determined by the period of the AC component. The Doppler frequency and the interference fringe spacing can thus be used to determine a particle velocity perpendicular to the beam crossing axis.

Calibration is not necessary with this measurement method, since the interference fringe spacing is a function of the optical setup alone (wavelength and crossing angle). It is also advantageous that only one optical access is required for measurements in closed measuring sections, since the laser light transmitter and receiver can both be positioned orthogonally to the same optical access.

At the IST, the 3D LDA system is used, among other things, on the engine radial compressor and on the open free jet channel. A traversable 3D probe is available for this purpose, which permits velocity and angle measurements in three spatial directions by means of the spatial arrangement of three beam pairs. The traversing of the measurement volume is carried out by means of a 6-axis industrial robots. 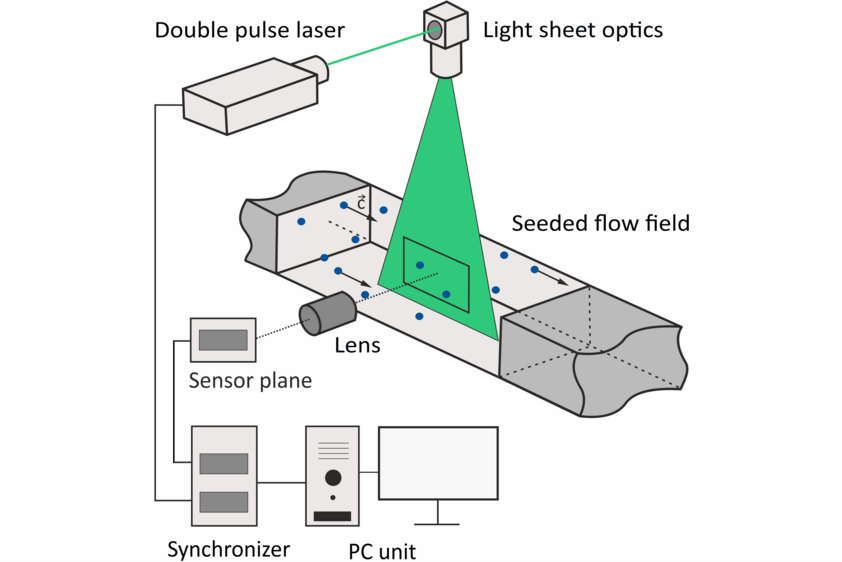 The PIV measurement technique is a laser-optical velocity measurement method that allows the instantaneous detection of two- or three-dimensional velocity fields in fluids. It can be seen as an extension of flow visualization, as it allows qualitative as well as quantitative statements about the flow pattern.

The measurement principle is based on the displacement determination of particles introduced into the fluid. These particles are illuminated in a pulsed laser light section. A camera is used to record the scattered light of the illuminated particles in the flow. For this purpose, a double exposure or two time-delayed single exposures of a CCD chip are made. By a statistical analysis of the recorded images, the velocity vectors of the particles can be determined from the displacement and the time of the exposure interval.

The non-contact measurement method PIV does not lead to any local influence on the flow, which is why it can also be used in very small dimensions at possibly high flow velocities. At the IST, the method is thus used, among other things, in centrifugal compressor diffusers. PIV allows the large-area measurement of the quantitative velocity field. This makes it possible to quickly detect flow phenomena such as detachments. The results obtained provide excellent data for the validation of flow solvers and thus contribute to the further development and improvement of turbomachinery. 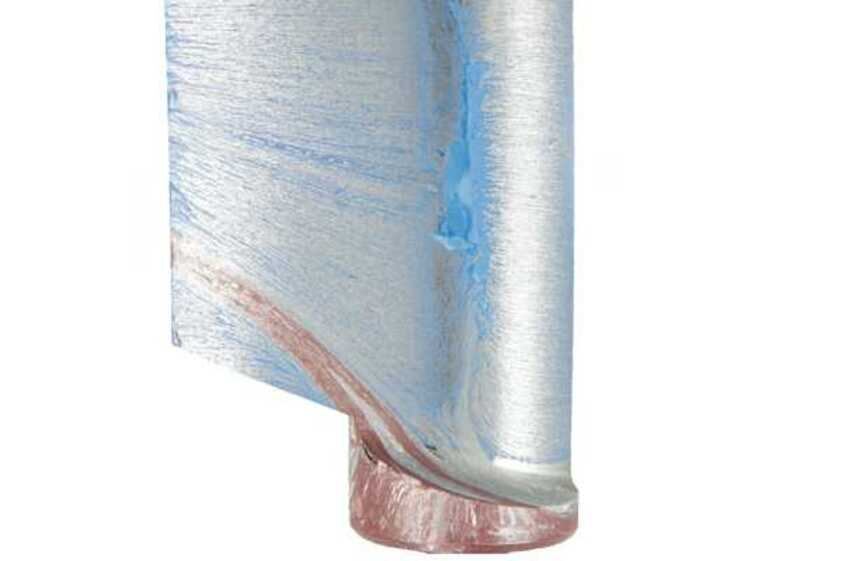 The visualization of flows is used for qualitative representation. Methods used are, for example, painting methods, thread methods, paint injection or optical methods such as the schlieren method, in which density gradients are displayed by deflecting a light beam and thus impacts can be made visible.

In the oil painting method, a mixture of oil, color pigments and additives is applied to the walls of the test specimen. As soon as the flow hits the wall, part of the oil mixture is carried along by the flow near the wall, resulting in the formation of streamlines. Detachment areas and eddies can also be easily visualized by the oil coating process.

The oil flow visualization is used, for example, in the institute's annular cascade wind tunnel to visualize leakage at the penny cavities of variable stator vanes. By using several colors, the outflow and inflow areas at the cavity can be identified. Corner stall and the present transitional separation bubble on the blade suction side can be determined in good agreement with the CFD.