You Are Here: Numerical Methods 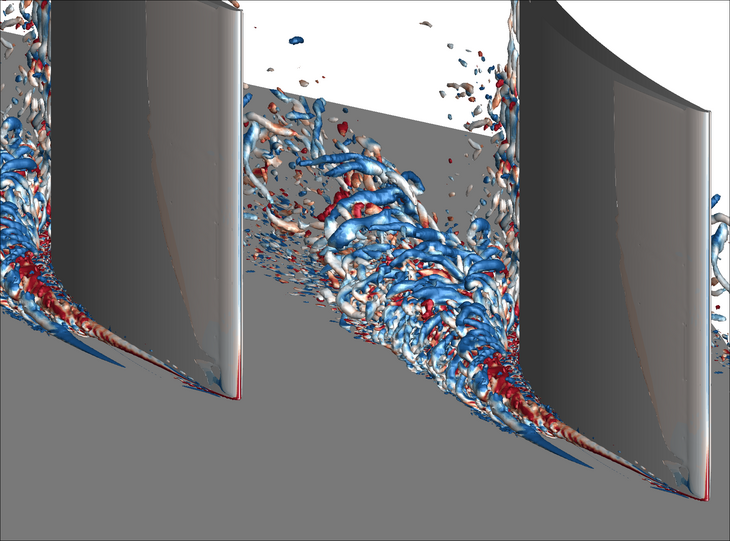 Numerical simulations are nowadays an integral part of the everyday work of engineers to investigate complex physical problems. For an optimal solution of the often interdisciplinary problems, complex simulations are usually required.

The Institute of Jet Propulsion and Turbomachinery has acquired extensive knowledge in the past decades through research projects on optimisation or modelling issues. In most cases, experiments accompanying the theoretical work were carried out, which served either to validate or to calibrate the methodology used. The extensive experience gained serves as a data basis and can be used for new research projects.

used. In addition, the 2D method called MISES and corresponding in-house developments are also used for preliminary designs. The use of the simulation software used depends on the objectives of the respective research project and is coordinated with the project partners involved.

The institute has its own cluster with more than 630 cores for the fast execution of the simulations. Furthermore, the institute is entitled to apply for computing time for large investigations within CLAIX and JARA. 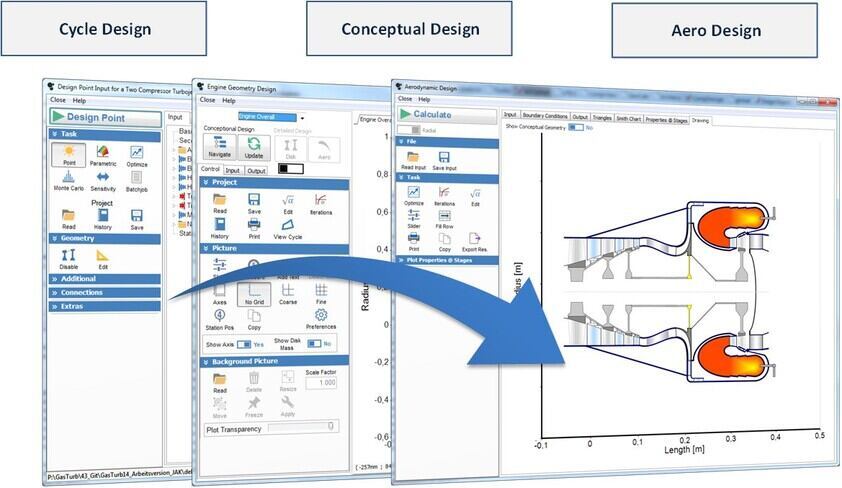 The subject of engine performance calculation has been intensively pursued at the Institute of Jet Propulsion and Turbomachinery since 2013. This includes the development of preliminary design and performance calculation methods for aircraft engines and stationary gas turbines as well as their application to new engine concepts. In addition, the GasTurb program environment is continuously being developed in cooperation with GasTurb GmbH and is distributed from Aachen around the world.

Within the scope of various projects the GasTurb software is used by the engine performance group for the calculation and design of engine cycle processes. In addition to the classical jet engines, more recent research projects also investigate concepts of electric and electro-hybrid aircraft propulsion systems.

Within these projects, the focus is on the one hand on the establishment of an objective evaluation capability and the verification of the feasibility of electro-hybrid concepts, which is limited, for example, by the specific power-to-weight ratio of the electrical components. On the other hand, the research projects investigate the sense of the implementation of the novel propulsion and engine concepts, for example to reduce fuel consumption, taking into account aircraft integration aspects. 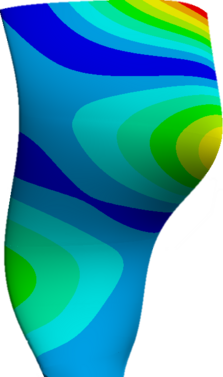 Finite element methods (FEM) are used at the institute for the structural-mechanical evaluation of compressor and turbine blades. In particular, rotor blades are subjected to a large number of loads during operation. Static mechanical methods can be used to determine the stresses caused by centrifugal and gas forces. Due to complex excitation mechanisms, turbomachinery blades are particularly exposed to vibrational stresses.

In order to be able to estimate the resonance pattern, the natural frequencies and modes are therefore determined by means of numerical modal analyses. This makes it easy to identify possible resonance situations during operation in the so-called Campbell diagram. Furthermore, the calculated eigenmodes are used for coupled aeroelastic simulations to evaluate the influence of the blade vibration on the unsteady flow around the blade. This allows to estimate the vibration stresses occurring during operation and to address design changes at an early stage, if necessary.

In the evaluation and optimization of complex systems, such as a hybrid electric propulsion system for a small aircraft, numerical substitute models are required, since the analytical tools quickly reach their limits with increasing system complexity.

System simulations are suitable for such applications.

If, in addition, the subsystems influence each other, the numerical surrogate models must be coupled to an overall model. The 2D or even 3D tools such as CFD simulations leads to a very high computational effort for these coupled systems. In addition, 3D CAD geometries are often not yet available during early development phases.

The use of system simulations supports the highly iterative development and optimization process by approximating complex phenomena via 0D or 1D equivalent models. In this way, sufficient physical accuracy can be achieved with short computation times.

Various well-known 1D simulation tools such as Simulink and Amesim are used at the IST. Possible use cases are the optimization of thermal, electrical, rotordynamic or hydraulic systems as they are used in a large number of test rigs or designed and optimized in research projects.